The Bitcoin mining landscape has undergone shifts over the past year due to China’s crackdowns. Here’s some data that shows how decentralized the BTC network currently is.

State Of Decentralization On The Current Bitcoin Mining Network

One way to study about decentralization in the BTC mining network is to go through hashrate dominance data of the major mining pools and companies.

The “hashrate” is an indicator that measures the total amount of computing power currently connected to the Bitcoin network.

Higher the value of this metric, more is the mining power on the chain, and hence better is the overall performance.

On the Bitcoin network, there are several big publicly-traded mining companies present. The percentage of the hashrate each of them make up for may shed some light on the degree of the decentralization on the BTC blockchain.

Here is some data from Arcane Research that shows the hashrate dominance of the major mining companies:

As you can see in the above graph, Marathon, the largest of the Bitcoin mining companies, makes up for just a little less than 2% of the hashrate.

The five biggest mining companies in the market combined control around 7% of the total hashrate on the BTC blockchain.

This isn’t that big a percentage so this picture of the network may suggest that the network is relatively decentralized.

However, many major mining companies actually combine their hashrate and mine under the various “mining pools.”

The below chart shows how the hashrate is distributed among the major Bitcoin mining pools.

Now this data, on the other hand, makes the Bitcoin network look more centralized. The largest mining pool, AntPool, accounts for 16% of the hashrate alone.

The five largest pools make up for 70% of the total hashrate on the BTC blockchain. This is a pretty significant number.

At the time of writing, Bitcoin’s price floats around $42k, down 4% in the last seven days. Below is a chart that shows the trend in the value of BTC over the last five days. 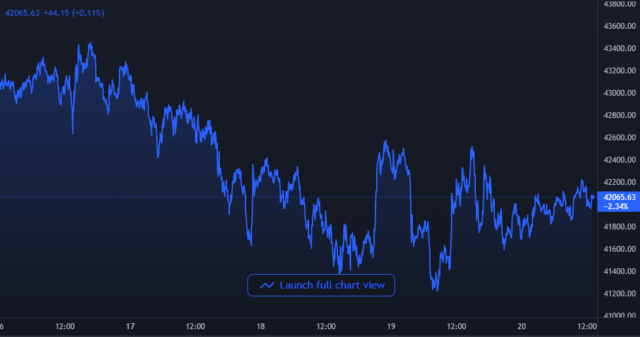 Bitcoin Supply In Profit Drops To 55%, Is The Bottom Here Yet?

MXC Partners with Polygon, Stretches User Base to 5 Million Worldwide

New PrimeXBT iOS App: How To Trade While On The Go

The people of El Salvador are protesting against Bitcoin bill