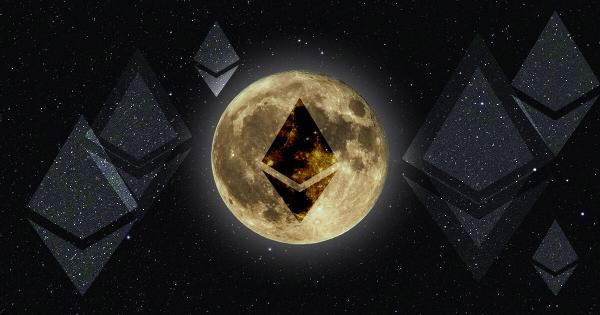 Ethereum broke the $4,000 level this morning ahead of the upcoming Ethereum Improvement Proposal (EIP)-1559 in July, data from multiple sources shows.

The world’s second-largest asset by market cap ($470 billion) and is arguably the most-used blockchain (it settles billions of dollars in transactions each day). ETH’s circulating supply is 115 million and it trades at $4,130 at press time.

The price surge saw over $77 million worth of ‘shorts’ get liquidated, data on markets tool Bybt shows. ‘Liquidations,’ for the uninitiated, occur when leveraged positions are automatically closed out by exchanges/brokerages as a “safety mechanism.”

Futures and margin traders—who borrow capital from exchanges (usually in multiples) to place bigger bets—put up a small collateral amount before placing a trade. If the market moves against them, the collateral is fortified and the position said to be ‘liquidated.’

And those betting against Ethereum took the brunt of liquidations yesterday. Of the $77 million in capital liquidated, Bitmex traders lost $26 million while Binance traders lost over $11 million.

The single largest liquidation was a Bitmex ETH trade to the tune of $25 million.

The EIP-1559 is a favorable catalyst driving ETH prices skyward. The proposal battles the network’s high gas fee issue and emission rate by introducing a ‘burning’ mechanism to all network transactions—meaning everything someone pays gas on Ethereum, the network automatically burns that amount.

The above leads to a perpetually decreasing ETH supply and is even termed “Ethereum’s scarcity engine” in some circles. This, in turn, is a favorable upcoming event for traders and investors are, as a decreasing supply would mean higher prices as demand for Ethereum increases/remains the same in the future.

Crypto research companies like Delphi Digital had identified this value growth back in August 2020. “Tying things together, EIP 1559 and staking [create a] symbiotic relationship where not only does increase usage drive value,” the firm said in a report then

It added, “But the introduction of cash flows to a wider group of participants for securing the network creates a more effective long term value proposition [for ETH].”

Instagram Users Will Soon Be Able to Mint and Sell NFTs