The billionaire owner of the Dallas Mavericks, Mark Cuban, tweeted his team had sold more than $122,000 worth of merch paid for in Dogecoin (DOGE). He added he intends to keep every token earned.

FYI, the Mavs sales in @dogecoin have increased 550pct over the past month. We have now sold more than 122k Doge in merchandise ! 🚀🚀🚀 We will never sell 1 single Doge ever. So keep buying @dallasmavsshop https://t.co/li32cdtcED

Given the hazy use case of DOGE and its infinite supply, this turn of events has raised a few eyebrows. Reading between the lines, has it come to the point where billionaire altruism is propping up the market?

Dogecoin is the people’s coin, not Bitcoin

Dogecoin was created in 2013 by Billy Markus and Jackson Palmer as a light-hearted way to poke fun at an industry that takes itself way too seriously.

But what started out as a joke has turned into something quite serious. Especially so during Q1 when the r/wallstreetbets saga took off. Members of this subreddit had taken it upon themselves to bloody the nose of hedge funds shorting Gamestop and AMC Cinema stock.

Looking for the next Gamestop, prominent figures in that movement selected Dogecoin as their crypto choice for a price pump. And it worked.

Q1 data from research firm Messari showed Dogecoin had significantly outperformed all other cryptocurrencies in the sample, including big players such as Bitcoin, Litecoin, and XRP. 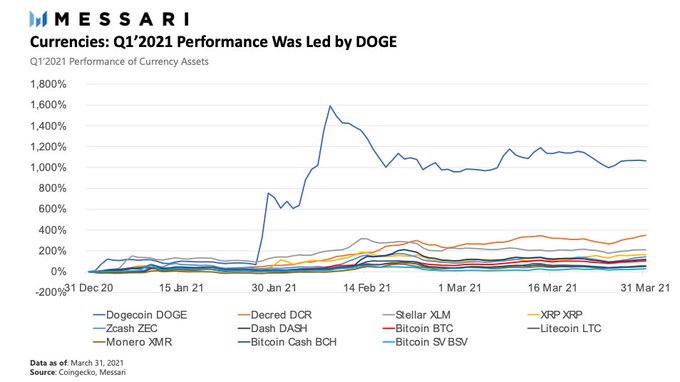 Given the r/wallstreetbets connection, Dogecoin came to symbolize the crypto equivalent of people’s power over corrupt faceless corporations.

What use is DOGE?

When it comes to fundamentals and sound tokenomics, Dogecoin is somewhat lacking.

The original use for DOGE was an online tipping mechanism to show appreciation for Reddit comments, YouTube creators, etc. Add to that an infinite inflationary supply of 5bn tokens a year, and it isn’t easy to justify token price appreciation.

On the spin side, the community is known for rallying around good causes, including supporting clean water programs in Kenya.

Its co-founder, Markus, came out of the woodwork recently to say he’s baffled by how his pet project has reached the heights that it has. At one point, DOGE entered the top ten with a market cap of $9bn.

“Maybe it’s that Dogecoin can be a good barometer for how far from reality things can get.”

Nonetheless, Dogecoin has found favor with both Mark Cuban and Elon Musk. Musk’s public support has never gone beyond tweeting, but Cuban’s acceptance of DOGE as a payment method is somewhat puzzling.

Commenting on this, Cuban gave no insightful reason why other than because he can.

“We have chosen to do so because sometimes in business you have to do things that are fun, engaging and hopefully generate a lot of PR. So we will take Dogecoin, today, tomorrow and possibly forever more.”

Given the charitable purpose of DOGE, few could argue that this project doesn’t deserve billionaire backing.

Great Apes NFT set to launch an APE NFT in the Solana Ecosystem, aims to reshape the NFT field